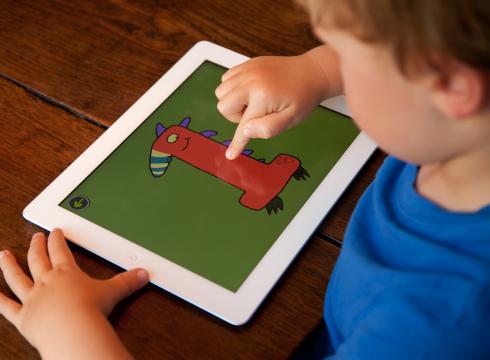 There are many apps in the market which are meant for children and are marketed as being educational. Pediatrician Jenny Radesky, who wrote the American Academy of Pediatrics guidelines for children and media, wanted to check it out.

Dr. Radesky expressed, “One of my big concerns about why apps might not be educational was because of the presence of distracting features such as banner ads that sit along the top of the screen and which contain stimuli that are irrelevant to the learning objective. And we were expecting to see those.” The pediatrician added that she was not expecting all the rest. The apps that are marketed for children under 5 years and under the Google Play Store, it was found that they had pop-up ads with disturbing imagery.

There were also ads that no child could reasonably expected to close out of. Moreover, when they are triggered the player got more ads. The players of Dancing treasure chests would give the young players points for watching video ads and were potentially endless. Moreover, a majority of ads were not marked at all. Even the characters in the games had gently pressured the children to make purchases , which is a practice that is known as host-selling that was banned in children’s TV programs in 1974 by the Federal Trade Commission. At other times the onscreen character would cry if the child did not buy something.

Dr. Radesky who is an assistant professor of developmental behavior pediatrics at the University of Michigan medical School expressed, “The first word that comes to mind is furious”. Radesky added that the study was started to look at the distraction and that his frustrated response is about all the surprising potentially deceptive stuff that was found. Hundreds of hours were spent by the researchers playing 135 different games. Many of the games had violated the F.T.C rules around unfair and deceptive advertising.