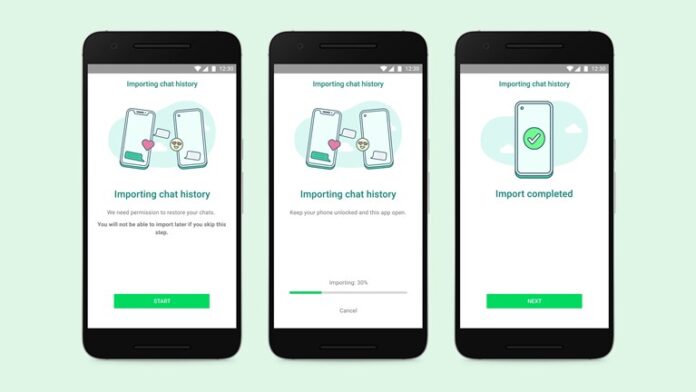 WhatsApp had earlier launched the ability to migrate the chats from the iPhones to some of the Samsung phones. But now it is all set to allow the chat history of the users from Android to iPhones. The signs of the feature being planned were first noticed on the beta version for Android. For now the details about the feature are still not clear but a report has said that to begin the process or migrating the chats, the Android device has to be connected to the iPhone with the help of a USB-C to Lightning cable.

Moreover the Move to the iOS app will also be required when the user is undertaking the migration process. The users will be able to get more details of the feature in the WhatsApp beta builds in future. At present WhatsApp requires the users to use the Samsung Smart Switch app for migration of the chats from an iPhone to a Samsung device. Now the Move to iOS app will be doing a similar job for the iPhone users. The process to build the feature had started off in the month of April, 2021. Now it seems like the feature is all set to be launched.

The iOS to Android migration feature is for now only limited to some of the selected Samsung Galaxy devices and not all of them. But the migration of the WhatsApp chat history from Android to iPhone will be available across all the devices. The ability to transfer chat history and media files from the iPhones to some of the Samsung Galaxy devices was launched when Samsung had launched the Galaxy ZFold 3 and the Flip 3 in August, 2021.

It was only recently that the feature had started to rollout and was also confirmed that it would be available across other Android devices also. The WhatsApp chat history transfer between the Android devices continues to be an easy process as the process it done on the cloud and no cables are required.

New Instagram physical camera to be created by Socialmatic