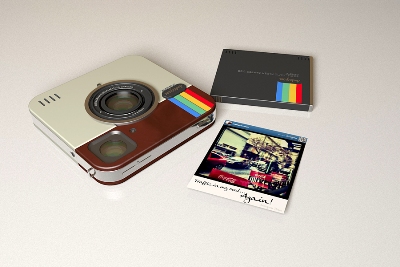 Fans of Instagram will be happy to know that a physical camera based on the popular software could soon be developed. In the year 2012, a concept camera called the Socialmatic Instagram camera was designed by ADR Studio. The company has recently said that it has received the required permissions to manufacture the device. According to Socialmatic, an MoU has been signed with C&A Licencing, which will allow the company to make a Polaroid digital camera that will allow for instant printing.

The new camera is set to have 16 GB of internal storage, with a 4.3-inch touchscreen display. There is an on-board printer that can be used to print physical copies of photographs as well. Some corners speculate that the Android platform could be what holds the camera together, although the exact details are anyone’s guess at this point.

Socialmatic hopes that the device will start to make waves, as it would the the first camera of its kind. The new camera could be released in 2014 and may have a variety of add-ons such as lenses, filters and bags.

Polaroid and C&A are well-known in photography circles and after a series of relentless negotiations, it appears that the companies are finally set to change the way people take pictures.