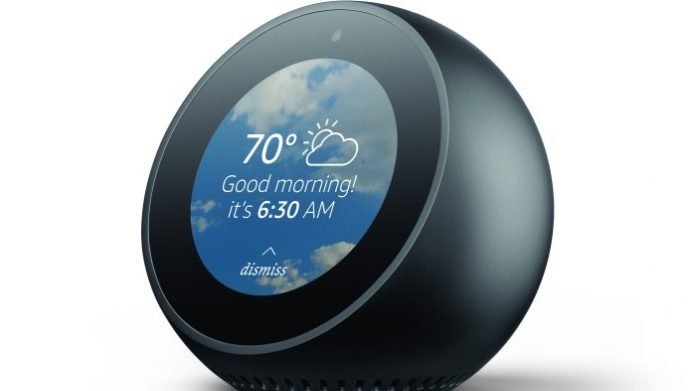 E-commerce giant, Amazon has reportedly unveiled about six new hardware products at an event in Seattle on September 27, 2017. Out of the products, the phone that has caught everyone’s attention is the Echo Spot. The Echo Spot is a little device that looks like an alarm clock which has been designed to be used and kept next to the bed. However, it is not just a clock, but has a camera which points directly towards the bed.

The online shopping giant had reportedly launched the Echo Look camera earlier in 2017 which has the ability to judge the outfits. The device can be placed in one’s wardrobe and will offer style advice. That was Amazon’s first Echo device which had a camera. Soon another product was launched known as the Echo Show which is a touch screen device which can be kept in the kitchen and allows the users to participate in video calls and also watch tutorials and recipes.

The Look device is available only by invitation and the Spot device seems like an experiment of how a camera can work in a bedroom. It is not just an alarm clock but will also provide information on news and weather reports. But there are a few privacy concerns as the microphone is always on and the camera points towards the bed. The camera on the device is basically used for video calling but it definitely remains vulnerable to a hack.

For now the $130 device might seem basic but has got a lot of scope in terms of its future abilities. Such devices can be a boon for the future homes due to its ability to turn a home in to a smart home. Talking about privacy concerns, it might not take much time to turn the concerns in to clear conveniences for luxury living. Cameras at home might even become a common phenomenon.