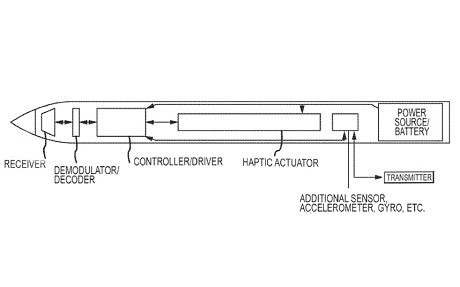 US based tech giant Apple has been granted a new patent for an intelligent stylus which can turn the drawings and writing movements in to digital lines and text on screen. The patent was awarded by the US Patent and Trademark Office and is known as the communication stylus.

The upcoming device will be a gadget which will have accelerometers and wireless communication hardware which can have the ability to transfer handwritten notes and sketches on the display of the smartphone, desktop or a tablet. However, iPhone maker is not the first one to introduce such a device. Livescribe already has a range of smart pens which convert physical handwritings to text and uses special paper and infrared sensors to record what is written by the regular pen’s ink nib.

Apple’s device will not use infrared but will have many sensors which will track the movement when it is picked up and the nib is pressed on a paper. The new stylus will also emit the need for a special paper to use the device.
The writing can also be played back and can be useful for teachers, trying to explain something to the students. The students will be able to see the writing on their tablets or computer and can be saved in real time.