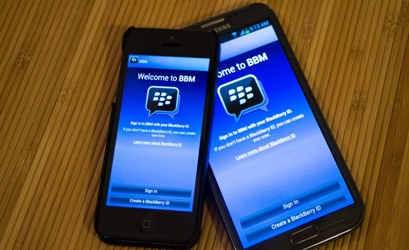 Handset manufacturing giant BlackBerry needed to suspend the rollout of its popular BlackBerry Messenger (BBM) to iPhone and Android platforms during the weekend. The company’s rollout was stopped after an unreleased version of the BBM for Android app became available online.

A post from BlackBerry mentioned that the unreleased app was creating problems which the company has been attempting to resolve as soon as possible. For now, the Android app has been disabled by the company, however, customers who have already downloaded the BBM for iPhone app can still use BBM. Luke Reimer from BlackBerry said, “Our teams continue to work around the clock to bring BBM to Android and iPhone, but only when it’s ready and we know it will live up to your expectations of BBM”.

Reimer said that they will start a staggered country roll-out of BBM for Android as soon as possible and proceed with the roll-out of BBM for iPhone. The company has not yet revealed the cause of such issues, but security expert Graham Cluley believes that BlackBerry might not be capable of handling with the increase of activities affecting its servers.

Meanwhile, the decision to pull the app might decrease the confidence of consumers.