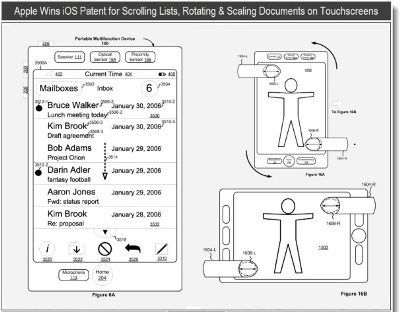 Despite a disappointing start, US phone maker Apple has managed to win an injunction, which band the sales of the rival Samsung Galaxy Tab 10.1 in the US. The US Patent and Trademark Office has awarded Apple 27 new patents which include patents for rotating, scrolling, scaling documents on touch screen devices.

The latest patent win is considered as one of Apple’s biggest wins yet. On June 26 a Federal court in California granted Apple a preliminary injunction funding the Galaxy Tab 10.1 to be substantially similar in the eyes of ordinary observer to an apple patent D 504,889 and virtually indistinguishable from Apple’s iPad and iPad 2.

However, there are possibilities that the win of the US based company could be short lived as Samsung could file an appeal the ruling and the court ruling is pending further review. But still one thing cannot be denied that the win of Apple over 27 US patents including one for its pinch to zoom is a big win which could lead to more patent litigation.

In short Apple has patented several gestures which are used today due to the prevalence of the touch screen phones. The gestures include, scrolling in the same direction as your finger is travelling, pushing to zoom out and pinch to zoom in.