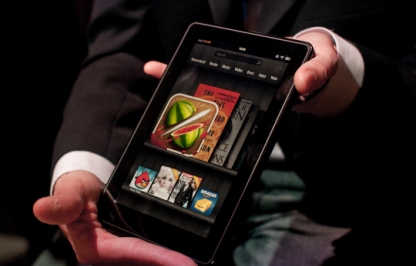 Online retail giant Amazon will be launching its event on September 6, 2012 where the firm is expected to launch its next generation Kindle Fire tablet. The online retailer has invited the press for the launch event but has not yet confirmed that it will be launching the devices.

The text which is printed in the invitation is very vague and simply says “Please join us for an Amazon Press Conference.” But the rumours are rife that the company will be using the event to launch its new devices which is also expected to be released in UK this year.

In terms of the specifications of the Kindle Fire it could feature a larger10 inch screen and runs on a good Android version. The specifications are also expected to have a front facing camera for video calling purpose along with a micro USB and micro HDMI ports.

The launch event of Amazon comes just a day after the Nokia’s Windows Phone 8 launch event in New York and also days before the launch event of the rumoured iPhone 5. According to a research firm, Amazon holds the third spot in terms of tablet sales just behind Apple and Samsung. There are also reports that Amazon will also be launching new e-reader device.