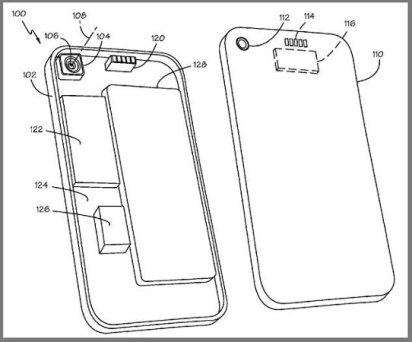 New reports says that a fresh concept for an improved iPhone camera system would allow the users to reconfigure or even replace the lens for optimal pictures. The proposed invention of Apple was revealed in a patent filing on June 14, which was discovered by AppleInsider and published by the US Patent and Trademark Office.

The application has been entitled as “Back Panel for a Portable Electronic Device with Different Camera Lens Options,” which includes illustrations from an iPhone like device with a camera located at the same top left corner location. The filing has also pointed out that the quality of digital images taken with highly compact devices has increased and the users now seek more sophisticated features which are typically found with the high end digital cameras.

The sophisticated features include, supplementary lenses and filters, optical zoom and optical image stabilization which is typically not found in the multi functional devices which include a camera. The filing has also mentioned, “It would be desirable to provide a structure for a compact device that allows the end user to reconfigure the optical arrangement of the device while retaining the benefits of assembling the device using a pre-assembled digital imaging subsystem”.

Overall, Apple’s solution talks about an iPhone like device which has digital imaging sub system with a lens that has an optical axis.